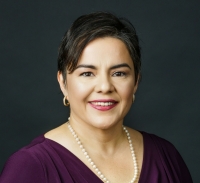 Growing up in Juarez, Mexico, Graciela Gonzalez Hernandez spent her free time climbing walls, leaping from roof to roof, and competing in every academic challenge that came her way, including the national science fair. She did everything her seven brothers did, and then some. Computers held an early fascination: She learned to program in fourth grade and excelled at it in high school, where her calculus teacher dubbed her “Amazing Grace”—a reference to computer scientist and US Navy Rear Admiral Grace Hopper. To pursue her Bachelor’s, MS and PhD in computer science at the University of Texas in nearby El Paso, she took the fast way across the border—via bicycle. “There were very few women in the classroom,” she remembers, “but frankly, I hardly noticed.”

Perhaps those “adrenaline fueled” early years provided a running start for several boundaries she would later jump. She became one of the first informaticians using natural language processing (NLP) methods to mine social media data for mentions of adverse drug reactions—and secured one of the first R01s on the topic from the NIH.  She also helped launch the Biomedical Informatics Department at Arizona State University (ASU). In 2016, she moved with her husband and five children across the nation to join Penn as an Associate Professor of Informatics.

Dr. Gonzalez Hernandez became interested in NLP by necessity, shortly after joining ASU in 2005. She had planned to work with Dr. Chitta Baral on a logic network to represent protein pathways, the building blocks of life, in such a way that the mechanisms of disease and healthy function could be simulated. By simply introducing a “faulty connection” –a protein over- or under-expressed, or not present—the program would show the expected disease state and, possibly, also explain what caused it. “But that was easier said than done,” she says. “Most of this information is not in any database—even now, most of it is only in published papers.

“So we went to another plan: find a program that extracts the information from those papers. But there wasn’t one that would do the job. We wanted the cake and the icing too, but we had to step back and forget about the icing—and then step back again and work on getting the right ingredients, those pieces of information in millions of published papers.”

With her PhD students, she participated in NLP competitions, coming in ahead of many established labs, and released a gene-name tagger, BANNER, that is still the most widely used around the world. She thought she would return to working in artificial intelligence—but the challenges in NLP kept coming. In particular, the rise of social media offered all kinds of new insights about people’s health. Just this fall, the NIH/NLM renewed Dr. Gonzalez Hernandez’s R01 “Social Media Mining for Pharmacovigilance” for $2.4 million, covering work through 2022. At the same time, she continues work on her other R01 from the NIH/NIAID, with colleague Matthew Scotch, finding geographic location mentions in published literature and linking them to GenBank to help precisely model viral spread. She has also has funding from the National Board of Medical Examiners to develop technologies for automatic assessment.

She still encounters skeptics who question how solid information can possibly come from the fluff of social media. Her answer: “We see that the trends in social media match the known side effects of certain medications, which validates our approach. If we can demonstrate that with NLP methods we can find what we already know, then we may also be able to find something that is not known and turns out to be accurate.

“We start with something easy: Can we distinguish someone who has Alzheimer’s from someone who doesn’t, by analyzing their writing? Sure, there are other ways to diagnose the disease, with greater accuracy. But the important thing is to discover the features of Alzheimer’s in the writing: When you can’t see the patient, just the writing, can you tell?” Those questions lead right into her next challenge:  “Could you possibly tell before that person gets the diagnosis?”